After months of waiting, Telltale have finally released a trailer for their upcoming series of the Guardians of the Galaxy which has received a very mixed response.

It appears that Telltale have stepped away from their iconic art style that’s prevalent in The Walking Dead and Borderlands releases and opted for a style similar to Disney’s Infinity games. As a fan of the developers, I prefer the scratchy and darker hues that Telltale have demonstrated and feel like GotG is going to be commercially driven – similar to the Minecraft series. We see the emulation of the property owners styles to fit into the mainstream expectations of the younger, more mainstream audiences rather than the comic book fans and hardcore fan bases. The characters appear very long and slender with a lot of block based colours and little defining features to portray itself as a Telltale game.

In all honestly, i feel the trailer demonstrates nothing of significant value. The action and comedy factors that underpin that Guardians of the Galaxy aren’t showing through and it feels more of a show reel of that characters we will be seeing through the 5 episode series.

What do you think of the trailers, are you excited or as wary as us? Let us know in the comment section down below!

Marvel are finally returning to the PC/Console gaming realm! (Although we are getting Guardians of the Galaxy by Telltale SOON) A trailer released on the 26th details the brand new partnership between the two industry giants depicting the Avengers weaponry and tools scattered across a devastated landscape.

So what exactly does this mean? Well first of all we are getting a number of games over the next few years. The first release is rumoured to be a Spider-man game in 2018 BUT this is more likely the Sony release that has been floating around. Secondly, its going to look hella’ pretty and will quite possibly be in tune with the current MCU.

What do you think of this news? Any Marvel heroes you want to see get their own game?

Its been a difficult few weeks for Star Wars fans who have been rocked by the death of Carrie Fisher. Even more so consider her reportedly large role within the 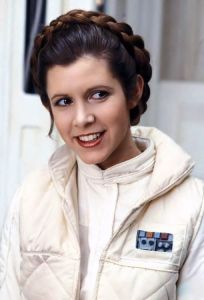 upcoming instalment of the series. Fortunately, the filming for Episode 8 has wrapped and Fisher will be making a posthumous return, but what about the final episode in this trilogy that also considers her role extremely important?

If we take a step back and look at the latest Star Wars adaptation, we can see Disney and Lucasfilms have a potential solution. Peter Cushing or as some may know him, Grand Moff Tarkin was digitally imprinted into Rogue One. Cushing, who died is 1994 was brought back to life by VFX artists and magicians to reprise the iconic role with express permission from his estate. Personally, had I not been told, I wouldn’t have known about this until after the release of the film which prompted a lot of controversy. Towards the end of the film we also witnessed a young Princess Leia using the same technology but was far more apparent.

Its being reported that Disney have already begun talks with Fisher’s estate to utilise her image as Princess Leia so they can finish this trilogy. As of what the talks

will consist of or if there will be any script/story changes, we can’t be sure, but its hoped by many that if they come to an agreement, Leia will be done gracefully, not overdone and her role heavily reduced or ended appropriately.

Considering the impact of the character on the universe and the film industry, I can see a deal going ahead. Fisher’s estate owes a lot to the Leia character and the fans that have supported them the over decades and I feel that justice can be done for both Carrie and Leia to round out her career with respectfully.

What do you think of this? Would you like to see Fisher maintain her role through CGI? Let us know in the comment section below!

2017 has only just kicked off and Bioware have already blown the doors off with their latest press release. The hotly anticipated release for the latest instalment into the Mass Effect Universe will be arriving in North America on Tuesday, March 21, 2017 and Thursday, March 23, 2017 in Europe.

“Mass Effect: Andromeda is our most ambitious Mass Effect game to date. We’re telling completely new stories, creating new characters, new planets, new species, and introducing new gameplay systems. And for the first time, we’re bringing Mass Effect to the Frostbite game engine, an incredible engine that’s delivering a tremendous graphical jump from the trilogy to Mass Effect: Andromeda. To deliver on this, we’re taking all the time we can to make sure you’re getting the best possible experience.”

In conjunction with this news, NVIDIA released a gameplay trailer showcasing in game footage and a few of the menus, mobs and manoeuvres in glorious HD (#PCMasterRace). From this short snippet alone, visually it looks incredible with crisp lines and a variety of lighting and colour. The menu concerns me due to its rather rapid and clunky looking movements but this could have been sped up.

With such hype and excitement behind Andromeda, EA have made Mass Effect 2 FREE for all users of their Origin platform for PC users. Unfortunately, no news surrounding the console community yet, but the big partnership with NVIDIA probably influenced such promotional strategies.

Are you excited for Andromeda? Let us know in the comment section below!

The long awaited 3rd instalment into the Mafia series is finally upon us. Will it follow Vito and Joey from 2 or take its own new path? Well apparently its going to take a new path, throw the past away and join a gentlemen named Lincoln Clay in 1968 after the Vietnam war. As a lover of all things Mafia and crime related, I’m worried. Its not what I had hoped for. See for yourself below

Let’s get right to this. Any decent superhero/comic book fan will know of Deadpool. Above we see parts of the reveal trailers and the leaks all bundled into one hell of a package. From this small short, we can really begin to see how Ryan Reynolds fills the shoes of one of the most beloved characters of the universe. Down below is the trailer for the trailer which tears into Reynolds previous appearance as Wade in some of the best marketing I’ve seen in a very long time.

Now personally, I’m not sure how this movie will fair with the general public who don’t know of the character and I worry that his reach and the violence may not appeal to them. Lets hope the Marvel community goes out in droves for this because we could be looking at a cult classic of the superhero universe!

I’m a bad man when it comes to Fallout. My first and only experience of the series was Fallout 3, not long after I got my first Xbox 360. The time I spent within the game was very little, in fact I gave up as a merely lost track of what I was actually doing. Today is the day I realise I should get back into it.

So if you’ve lived under a rock the past few months, you would know Bethesda have been teasing something. No one was quite sure until yesterday when a Fallout styled timer appeared across their platforms and low and behold, we got a trailer.

The plot is one that reflects the series however, what drives that narrative is unknown. Hopefully we shall see some more information arrive when E3 is in full swing.

What do you think? Do the graphics look the part? Let us know in the comments below

Well, here it is guys. The brand new instalment of the Assassins Creed series has finally arrived, titled Syndicate. Based in London during the Industrial Revolution, we follow our new Assassin, Jacob. Funnily enough, the combat has taken a very personal approach. Its much closer and features a lot of the weaponry used in that period, such as the hidden blades and brass knuckles in giant gang fights! Everything seems very direct, gory and fast paced but its character is what has drawn me in. Every game based in London loves picking up on Jack the Ripper, what will stop these? Could Jacob be Jack? Could those he murdered be spies for the Templars? I’m officially calling it. Jack the Ripper is our Jacob.

Hopefully we will see a return to Assassins Creed that is truly worthy of the next gen consoles that we all deserve!

Soon we will have an official trailer to show everyone who missed out on the live showing so stick around for more information!

Assassins Creed Syndicate will be dropping on the 23rd October for Xbox One, Playstation 4 and PC.

I Want to Believe

After months of speculation regarding the return of cult 90’s sci-fi sensation The X Files, FOX has finally announced the confirmation of the show’s return in early 2016! Stars David Duchovny and Gillian Anderson are set to return as Agents’ Mulder and Scully whilst Mitch Pileggi is also set for a return as Walter Skinner. Things are looking good for 2016! Check out the link below for the showing schedule for FOX in early next year which also includes an all new series of Gotham as well as a TV version of Phillip K Dick’s Minority Report.

This time we have a Monty Python take very reminiscent of Bruce Almighty in the form of Absolutely Anything. With Simon Pegg as lead and co-starring Robin Williams’ final performance as the voice of Dennis the dog. Looking like a very British comedy (obviously) the humour looks to be both crude and stupid with a far more realistic approach to what someone would do with the ability to do anything!

The movie releases August 14th and is the final appearance of the late, great Robin Williams.