“Sooner Or Later The Party Has To End…” 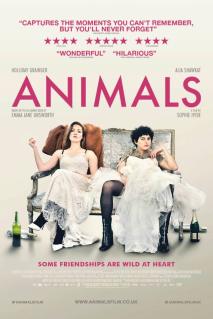 Less of a coming of age drama and more like a raging alcohol and drug fuelled stupor, South Australian director, Sophie Hyde, brings to life Emma Jane Unsworth’s 2014 novel of the same name in the form of Animals, an internationally produced “buddy” movie which sees Holliday Grainger (My Cousin Rachel) and Alia Shawkat (Green Room) as Laura and Tyler, two close friends hitting the tender age of their mid-30’s who spend their time frolicking, excessively drinking and partaking in hard drugs in the name of staying young, keeping fresh and shying away from the responsibilities of the “adult” world. Screened to the public at this year’s Sundance Film Festival and departing with a overly positive buzz, Hyde’s movie is a refreshingly low-key if wildly spirited take on the trials and tribulations of adulthood, one which embraces many of the plot devices and genre conventions evident in previous and better works of a similar ilk, but too a film which works off the strengths of its’ leading characters as we follow them through a particular path which audiences of similar age range will undoubtedly understand and sheepishly relate to. 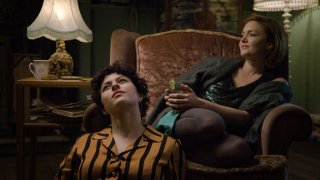 With 2019 seemingly being the year where the coming of age movie has re-emerged into the cinematic spotlight, Animals follows most closely to the likes of Booksmart in some ways, a film which takes the American Graffiti route of exploring one last childhood hurrah before venturing into the world of growing up, and whilst of course the age ranges of our particular characters in each film differ by a decade or so, the central narrative of Hyde’s movie focuses on two friends seemingly reluctant to take that next step into becoming what they fear most; serious adults. With Grainger’s Laura then becoming the first to attempt to bridge the gap between child and adult as she falls in love with Fra Free’s (Les Misérables) mopey, piano loving straighthead, tensions soon build up between the pair, with each seemingly beginning to resent each other as they slowly drift apart as Laura falls more into the trap of modern-day normalisation involving marriage and family, whilst Tyler continues her life of unemployment, heavy drinking and endless partying. With the film relying on the central double act to basically hold the film together, the performances of both Grainger and Shawkat are good enough to keep you more than interested, aided nicely by some sharp comedic dialogue and snappy sarcastic quips, and whilst Hyde’s movie will come and go without leaving much of a lasting impression, Animals is an enjoyable, if slightly wandering, tale of friendship and the ability to drink many, many bottles of white wine. 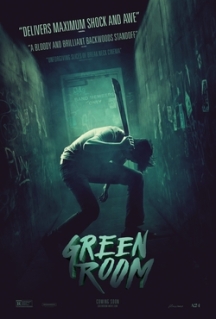 Of all the previews released into my local world of cine this year so far, Jeremy Saulnier’s latest splatter-fest Green Room, is by far the least publicised and most unknown entity I have ventured into seeing, being one of the few rare times in which I begin a film without an inch of prior knowledge, a rare commodity if ever there was one in this day and age of stuffed-down-your-throat propaganda-esque trailers and endless streams of publicity both on the large screen and the small. Not recognising the director’s name at all until the end of the movie when my overused IMDB app was swiftly opened up, Green Room was indeed the work of a mad-man, one who has an obvious love of blood splatter B-Movie greatness, harking back to the days of grindhouse pictures, whilst having an uncanny knack of relieving tension in the most horrific of scenes with the jet-black comedy element blending seamlessly with the complete and utter carnage that occurs on-screen throughout the film’s more than modest 90 minute run-time. If you can handle sharp objects, killer dogs and death, lots of death then continue to read on; Green Room is one of a kind. 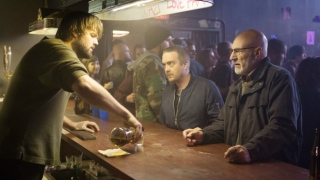 Following in the footsteps of recent B-Movie blood-splatter gems such as the brilliantly comical You’re Next and even last years’ Marmite picture Knock, Knock, Blue Ruin director Jeremy Saulnier brings to life a fusion of punk rock sensibility to the genre, with Anton Yelchin’s power quadruple being caught within a rather sticky situation after performing at a isolated Neo-Nazi clubhouse ran by Captain Picard himself, Patrick Stewart. What follows is a tension-filled gore fest with explosions of violence that can hold up against anything in its’ respective genre in terms of shock value, yet the undercurrent of comedy helps to differentiate the film from being a proper downer of a movie in line with something such as Eden Lake, a movie with no laughs whatsoever, with a recurring joke about desert-island bands being particularly humorous right up to the final scene. Twists and turns, blood and guts, Green Room most definitely isn’t for everyone but if you are like me and enjoy the twisted nature of B-Movie greatness, check it out. Just don’t east beforehand.