“Bumblebee, Our War Rages On. You Must Protect Earth, And Its People…” 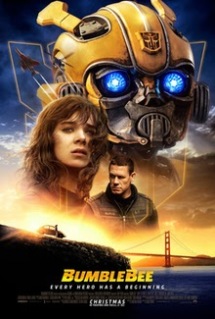 With Transformers: The Last Knight undoubtedly holding the title for one of the worst films in recent cinematic history last year, the thought of having to endure yet another entry in the undying Hasbro based franchise heading into the last few weeks of the year harnessed a similar reaction to being handed a large straw bag of coal for Christmas after anticipating something much more useful and entertaining. Extravagant similes aside, heading into Bumblebee after being made aware that no longer were the awful directorial mittens of Michael Bay actually attached to the project, with the American killer of contemporary cinema reduced to a slight producing role, my expectations were somehow slightly raised in anticipation of a movie which just might get the subject matter bang on for the very first time in just over the course of an entire decade. Directed by the BAFTA winning Travis Knight, a filmmaker famous for his works on animation, with the excellent Kubo and the Two Strings acting as the American’s official directorial debut, it comes as no surprise that Bumblebee is undoubtedly the first film in the Transformers franchise to actively be of any good, with it being a character driven, effects heavy coming-of-age science fiction adventure which scrapes the pallet clean of the woe which came before it and offers up a thoroughly entertaining and engaging end of year blockbuster. Yes that’s right, I got weepy at a Transformers movie. 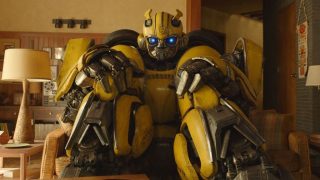 Of the many plus points, the primary concern of Bumblebee clearly settles on an intention to go with a completely alternative filmic sensibility to the previous entries in the franchise, with the painful epileptic editing, jokes about statutory rape and fascination with up skirt camera shots thankfully no more in favour of a film with a central narrative both enjoyable and crucially, family friendly. Along with proving just how awful a filmmaker Michael Bay has turned out to be, Knight’s movie understands the notion and impact of character depth, with Hailee Steinfield’s (The Edge of Seventeen) central music obsessed teen, Charlie Watson, beaming with levels of effective characterisation unseen previously within the franchise within the first five minutes of the movie. With the CGI superbly noticeable due to the film’s somewhat low-key approach in comparison to previous ventures, the relationship between Charlie and the cutesy titular robot in disguise is undoubtedly the most impressive aspect of the movie, with laugh out loud comedic set pieces and charming interactions resulting in a central partnership which brings to mind the likes of E.T and at times, Big Hero 6. With a crowd pleasing era-based musical jukebox featuring the likes of Tears for Fears, Simple Minds and a continual riff regarding The Smiths, Knight’s movie is a surprisingly accessible and charming Transformers adventure, a movie with so much to like even with a rather cliched central plot, yet the most crucial aspect of Bumblebee is that it is a movie which sets a precedent and platform for potential future films in the franchise by clearly signalling to everyone involved; THIS IS HOW YOU MAKE A MOVIE IN THE RIGHT WAY. Please take note.

“I Don’t Know What To Believe Anymore…” 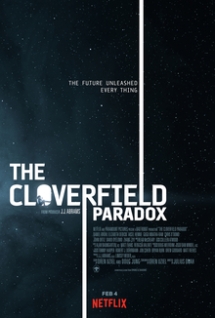 Dropping out of nowhere and onto Netflix in a remarkably abnormal and somewhat anarchic fashion, The Cloverfield Paradox, the second sequel to Matt Reeves’ 2008 shaky-cammed monster marathon Cloverfield after 2016’s claustrophobic, 10 Cloverfield Lane, bears it teeth without any sign of meaningful marketing or propaganda-esque pushing aside from a thirty second trailer proceeding its’ release only hours before its’ availability worldwide on everyone’s favourite streaming service. Whilst such a decision is undoubtedly refreshing and boundlessly groovy, the question remains whether the film itself is worthy addition to a franchise which deserves plaudits for its’ adventurous attempts at building a somewhat Twilight Zone infused shared universe, and with a cast list featuring the likes of Gugu Mbatha-Raw (Miss Sloane), Daniel Brühl (Rush) and David Oyelowo (Selma), and a ideas-based narrative which attempts to solve the ambiguities of its’ predecessors, The Cloverfield Paradox, on paper, has success stamped all over it. Unfortunately however, Netflix’s latest high profile release is a ludicrous mess of a movie, one which begins in absorbing fashion with acres of room to flex its’ muscles but then descends into a shark-jumping bore-fest which not only veers the franchise off course, but could potentially endanger it completely.

Attempting to gel together the mystery at the heart of the franchise in regards to the origin of the destructive beast from the first entry, The Cloverfield Paradox, directed by big-time debutante, Julius Onah, follows Mbatha-Raw’s Ava Hamilton as she crews up with her expeditious space team aboard the Cloverfield Station in order to test the particle accelerator by the name of “Shephard” which has been designed in order to combat the life-threatening global energy crisis on Earth. Mixing in elements of Interstellar, Event Horizon and in regards to its’ dealings with augmented reality splits, the rather excellent, if little seen, Coherence, Onah’s movie suffers from having too much to say without any real follow-through, and with a wildly inconsistent tone which rakes in awfully timed comedy amidst perils of catastrophic possibilities, The Cloverfield Paradox is undoubtedly a missed opportunity and hands down the worst entry of the franchise thus far. With Chris O’Dowd being the glaring error of casting, with his supposedly intellectual character undoubtedly the most cringe-worthy performance of the year so far, and elements of slapstick-laden body horror amidst dialogue which can only be described as the cinematic equivalent of a paint by numbers book, Netflix’s latest big budget cornerstone is really quite poor, and even when the ideas on the surface are interesting enough to warrant some form of applause for trying, the execution is badly managed and ultimately, a sobering disappointment.

“In The Coast Guard They Say You Go Out, They Don’t Say You Gotta Come Back…”

Based upon “The Finest Hours: The True Story of the U.S. Coast Guard’s Most Daring Sea Rescue” by Michael J. Tougias and Casey Sherman, Craig Gillespie’s The Finest Hours is a film that intends to be as gripping and wet-soaked as the shores of Cape Cod but ultimately comes off as more of a damp squib, with a cast including Captain Kirk himself, Chris Pine, Casey Affleck and Eric Bana not enough to save it from the pit of mediocrity it safely floats upon before inevitably sinking into the realms of history. Much like the true-life tale, an anecdote I’m sure incredibly popular and well versed between the secular, sea-wise clans of the U.S. Coast Guard, The Finest Hours is a movie that has somewhat been hidden under the radar and away from the cinematic masses, with not even a trailer being in sight within my many ventures to the world of cine over the course of the past few months or so, and with this in mind, the sheer lack of advertisement and press-hounding may indeed result in the film not exactly finding a key audience. Were it a more intriguing tale of survival in line with other sea-faring adventures such as Ang Lee’s The Life of Pi, The Perfect Storm and even, see it to believe it, Titanic, perhaps The Finest Hours could have been the riveting adventure it perhaps wanted to be seen as. 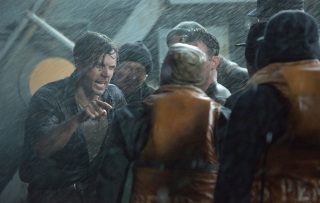 Adding to the mediocrity is the fundamental saccharin sweet nature of the movie, with the influence of Disney being particularly noticeable within scenes that not only encourage the burning sensation of a face-palm, but also result in either a painful palpitation of a cringe-induced stasis or a desire to swiftly stick fingers down your throat in order to release the sickly build-up of Disney-induced diseases. Aside from the land of over-sentimentality, award for most unintentional psycho, co-dependant girlfriend of the year has to go to Holliday Grainger for her role as Chris Pine love interest, Miriam Webber, a role which could easily be seen as a mid-20th century portrayal of Glenn Close in Fatal Attraction. Seriously, if you aren’t put off by the possibility of a creepy girlfriend by The Finest Hours, then nothing will. In a nutshell therefore, The Finest Hours sure ain’t the film it would love to be, with a sheer lack of threat or suspense killing the film stone dead, a film which requires such in order to be seen as truly worthwhile. See it in a Blockbuster near you. Oh wait, this isn’t 2003. Just catch it when you can, but don’t rush to see it.