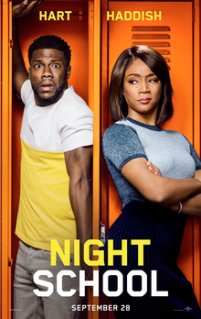 Directed by American filmmaker, Malcolm D. Lee, director of the surprisingly well received Girls Trip from 2017, Night School sees Lee team up with Kevin Hart, the high pitched, knowingly “pint-sized” comedian whose venture from the stage into cinema has been somewhat, how can I put this, exhausting, with the likes of Jumanji and Get Hard not exactly prime examples of a performer putting his talent to best use thus far. Based on a screenplay seemingly dissected by a committee of writers, including Hart himself, Night School sees Hart in the lead role as Teddy Walker, a high school dropout who constantly feels the need to impress his fiancee amidst wallowing under the pressure of proving other people wrong by driving fancy cars and renting flash apartments in order to disguise his career as a low-level BBQ salesman. After the complete and utter destruction of said BBQ sales space however, Walker is given the opportunity to work alongside Ben Schwartz’s (The Walk) financial analyst in a bid to recover his own career, but after discovering the only obstacle preventing him from doing so is his complete lack of GED’s (Sort of a GCSE hybrid qualification), Walker heads to night school under the watchful eye of Tiffany Haddish’s (Girls Trip) enthusiastic teacher, Miss Carrie.

Whilst the overall tone of the movie is surprisingly buoyant and pleasant, offering surface scratching comments on the notions of learning disabilities and the effect it can have on one person’s foray into the real world, and performances all around are undeniably dedicated, particularly from Haddish, whose cocky, streetwise power-house levels of sass allows her character to be both the most believable and relatable, Night School primarily suffers from the age-old problem of American comedies by not managing to balance its’ wildly inconsistent tone, with rather silly and embarrassing slapstick comedy being intercut with awfully designed set pieces which just make certain parts of the movie a real nightmare to sit through. However, where the film does manage to succeed is in the contained elements of the piece, particularly in our leading character’s relationships with each other, ranging from within the confines of the classroom in a The Breakfast Club inspired set-up to congratulating each other at results day in a way which did manage to slightly win me over, and whilst the film’s runtime seemed to miss the hand of a strong-willed editor willing to shed at least half an hour, Night School is mind-numbing, fluffy fun which doesn’t injure, maim or last long in the memory either.

Despite the fact that the Robin Williams starring, 1995 adventure romp Jumanji was somewhat dismissed by many critics when first released despite it being a somewhat successful item at the box office, the cult status and underground following of the movie since has subversively led to both a re-examination of its’ qualities by many and as per the norm of many cinematic releases in the current climate, a unwarranted sequel. Directed by comedy staple, Jake Kasdan and featuring a script co-written by Chris McKenna, whose previous credits include the likes of The Lego Batman Movie and Spider-Man: Homecoming, Jumanji: Welcome to the Jungle is a functional if rather predictable and laborious adventure romp which utilises the star power of its’ cast to shrug off the many, many weaknesses which encompass its’ existence, and whilst many will be swept up in the wisecracking humour and electric editing pace, Kasdan’s movie is the epitome of a release which can be crammed into the genre of “not exactly my cup of tea”.

With the titular gaming sensation transforming its’ form to keep up with the popular trends of the twenty first century, our leading four youthful heroes are sucked into the jungle of Jumanji where complete control of their gaming avatars forces them to play the game and defeat the threat of Bobby Cannavale’s power hungry, insect ridden villain. With Dwayne Johnson, Kevin Hart, Jack Black and Karen Gillan taking over for the majority of the movie therefore, the narrative mixes the absurd nature of our heroes’ surroundings with ongoing banter style comedic quips, most of which ironically do make an appearance in the film’s trailer, and although the chemistry between the leading quartet is undeniable, the film never really progresses from its’ opening gag, resulting in endless penis and body transformation jokes which do end up becoming increasingly grating amidst one of the most self-aggrandizing performances from Johnson ever in his on-screen career. With Cannavale’s pedigree as a villain well known after his turn on Boardwalk Empire, his character is ultimately completely wasted in favour of numerous CGI-ridden action, and whilst Kasdan and the crew are obviously having a superb time, the fun only resonates for a short spate of time, and for a film which runs on for two hours, well, you can do the math. 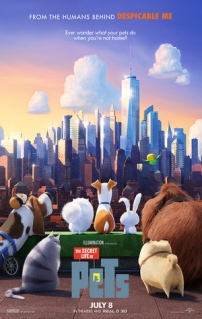 Ever since the origin of those funky yellow guys who seem to speak a mix of drunken English and incomprehensible gibberish, Illumination Entertainment has hit the big time. With Minions taking an extraordinary amount of cash last year, The Secret Life of Pets is indeed the next big pet (no pun intended) project for Universal, a film which simply won everybody over with its’ short but sweet introduction to the movie in which we witness segments of different pets getting up to no good whilst their owners are away. Now with the full movie being released. the real question remained whether the 90 minute spectacle would live up to the promise billed in the films’ trailers and after watching the finished product, The Secret Life of Pets is indeed a film which is guaranteed to bring in the big bucks but ultimately a film, much like last years’ Minions, is fairly unsubstantial and one that although is good fun for the time spent with it, doesn’t exactly remain with you after it’s finished. 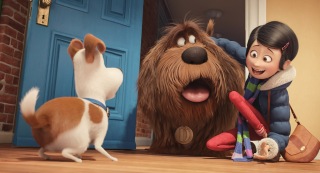 Featuring fundamentally likeable characters such as charismatic and fluffy dogs, crazy homicidal bunny rabbits and a lackadaisical overweight cat, The Secret Life of Pets is guaranteed to satisfy the younger generation with fantastic animation being present throughout the entirety of the film, but the problems come up to the surface when observing the rather unoriginal plot and continuous moments of sheer destruction caused by our beloved titular pets that seems to go completely unnoticed by the humans in this particular tale. I know guys, it isn’t meant to be the most fictional depiction of the world in which we live, but The Secret Life of Pets too often banishes the hope of a strong plot thread and substitutes it for loud, crashing car chases or James Bond esque villainous lair escapes. Maybe I’m looking too deep into it or maybe I’m right but whatever the result, The Secret Life of Pets is a solid addition to the Illumination canon but not much else. 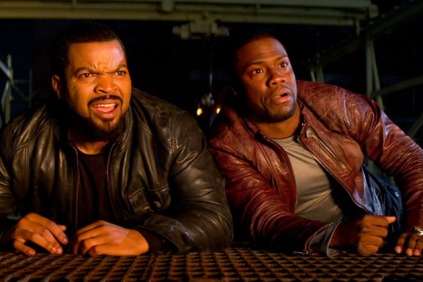 If you’ve ever seen the Rush Hour series, you have a very good grounding in Ride Along. The buddy cop movie that features Kevin Hart (Ben Barber) as campus security for a college/high school budding for a job in the police to live his dream and marry his girlfriend (played by Tika Sumpter). Barber’s girlfriend happens to be Ice Cube’s (James Payton) sister who is in the midst of an investigation that he’s poured all of his man hours into and is seeing little results from. To deserve Payton’s respect as both a police rookie and his blessing of marriage, Barber must go on a ride along to prove his worth.

Comedy movies are genuinely hard for me to review. The obvious lack of attention to the story is normally bad in any other genre apart from certain action movies but Ride Along has a balance of a story (all be it predictable) laced with comedy. It was enough to engage for the majority but moments tried to initiate emotions that weren’t compatible with the flow (real good time to run to the toilet if you drank to much). However, to actually progress the story did well at giving an ending, no matter how cheesy it was.

As one of Kevin Hart’s stand out roles in which he is the main focus, he does fairly well. His comedy style can be widely accepted by many and when you act stupid and do nothing but talk on stage, it isn’t very hard to get into character for Ben Barber. Ice Cube also didn’t have far to go, going from gang banger to FBI agent in 21 Jump Street and now wild police officer doesn’t stray to far from the line. With flashes of meme based comedy that heavily involves memes of himself blended with some of his tunes are a great homage to his work and how much he’s changed. As much as he was type-cast, the past “cop-killer” attitude makes his presence that much funnier.

Before I conclude, I would just like to pick on the filming and editing. At points, the editing done to the scenes (primarily the title sequence) look horrible. The screen is far to filled with action to be screwed over by some cheap ass graphics thrown across them that look like they’ve come out of Microsoft Word 1998.

To conclude, the film was great fun. Although a bit risqué for a 12 rating in the UK, its comedy thrives off of the success of Rush Hour by mimicking the duo style (PS – Ride Along 2 has been announced.). A good cast, a decent plot that can be ruined within minutes of the movie and a movie that is built for pure enjoyment. I look forward to another instalment and give this a 7/10.