Film Review: Battle of the Sexes

Fresh from her Oscar win in 2017’s best film so far in the form of Damien Chazelle’s La La Land, Emma Stone leads Battle of the Sexes, the latest from Little Miss Sunshine and Ruby Sparks directors Jonathan Dayton and Valerie Faris, and a film which focuses on the titular infamous tennis match in 1973 between Billie Jean King and Bobby Riggs which ultimately lit the touchpaper for King’s advocacy for feminism and LGBT rights within twentieth century America. With Steve Carell co-starring as Riggs and the likes of Andrea Riseborough, Sarah Silverman and Bill Pullman all making an appearance, the husband and wife directorial pair’s return is one of rousing success, a brilliantly acted docu-drama with a hell of a lot to say, and whilst the film sometimes doesn’t quite succeed in cracking open effectively all the notions evident on display, Battle of the Sexes is admirable in its’ attempt to raise the same questions which were raised forty four years ago but are unfortunately still increasingly evident even today.

With Stone continuing to prove why she is arguably the most in-demand talent within Hollywood at this moment in time with yet another brilliantly nuanced performance as Billie Jean King, the film’s strongest narrative thread is undeniably the relationship between her character and Andrea Riseborough’s stylist love interest, Marilyn, a partnership which not only holds the most substance between any of the leading cast in the movie, but thanks to effective dialogue and intensely invasive camera shots is so authentic in its’ design, the movie could have been good enough simply focusing on this particular plot thread alone. With a grainy, stylised 1970’s aesthetic and a jukebox soundtrack accompanying the story, Battle of the Sexes is undeniably a crowd-pleasing ace, and with a final act which although is undeniably inevitable in regards to its’ outcome, still manages to be rousingly intense, Faris and Dayton’s movie is ironically one of the more timely releases in a year rife with discussions regarding women’s liberation and the effect of feminism. Long may it continue.

Get In The Ring 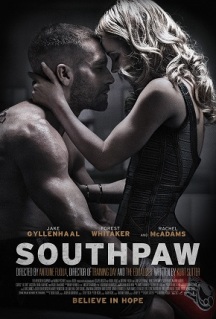 Sitting side-by-side with the release of Inside Out this week is the release of Southpaw, a boxing drama which focuses on the rise and fall of Jake Gyllenhaal’s (Donnie Darko, Zodiac) Billy Hope after witnessing the death of his beloved wife (Rachel McAdams, True Detective) whilst being directed by Antoine Fuqua, the American mastermind behind the Oscar Winning Training Day and the not-so-Oscar-winning The Equalizer from last year. What brought the most anticipation from the film for me personally however, aside from the brilliant Gyllenhaal, was its’ scriptwriter, Kurt Sutter, the architect behind one of the most addictive shows of recent years, Sons of Anarchy, who takes full control of the story for the very first time in a cinematic format after years of making waves on the small screen. The question that needs to be answered therefore is does Sutter’s first taste of Hollywood pull out all the punches or does it find itself seriously on the ropes? I’d say somewhere in between.

Throughout the course of the movies two-hour runtime, there are examples of Sutter in his prime, particularly in regards to scenes in which we witness out hero Hope break down under the influence of his wife’s loss, showing how in moments of desperation and despair, Sutter’s writing can flourish. One obvious difference for me between Southpaw and Sons of Anarchy for example was the way in which I never felt guilty or treacherous in my support for the films’ lead, something of which I felt whilst watching Sons of Anarchy where the bulk of the time, our supposed “heroes” are off committing murder or some other form of major crime. Of course, one of the reasons Sutter’s writing works so well is mainly due in part to the performance of Gyllenhaal, who once again astutely showcases his talent as an actor and gives the best sporting performance I’ve seen since Christian Bale in The Fighter, a performance that subsequently won him an Oscar, whilst solidly being supported by the veteran of cinema that is Forest Whitaker as coach Titus Wills. 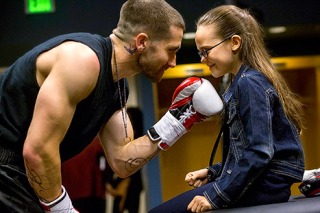 In terms of the overall quality of the film however, Southpaw’s connection with The Fighter ultimately stops there however with the latter being a much better piece of cinema as a whole, whilst the former having flashes of brilliance, particularly in the nail-biting fight sequences, but overall feeling rather cliched and even cringe-worthy in some places, particularly the “guest” additions of both the pimp-looking Curtis “50 Cent” Jackson and the rather worse-for-wear Rita Ora, who although improves from her rather pants cameo in Fifty Shades of Grey, doesn’t exactly inspire hope for any chance of a future career away from BBC One and into Hollywood. So for a first shot at the gates of Hollywood, Sutter gives it his all in producing a script worthy of a one-time viewing, but definitely nothing more, whilst director Fuqua definitely improves on the rather arduous watch that was last years’ The Equalizer and succeeds in producing a film that lasts as many rounds as it needs to, but ultimately fails to launch that final, winning blow.