Film Review: The House with a Clock in Its Walls

“There’s A Clock In The Walls. We Don’t Know What It Does, Except… Something Horrible…” 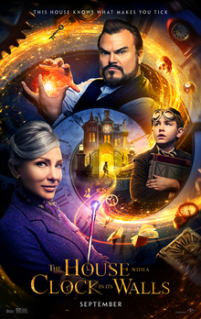 Primarily known for being best buds with Quentin Tarantino which has helped establish a directing back catalogue which is seeped in R-rated nastiness, with Hostel and Cabin Fever being the ugliest standout releases thus far, Eli Roth returns for a second cinematic swing this year after Death Wish with The House with a Clock in Its Walls, a 12A rated adaptation of the 1973 novel of the same name from American author John Bellairs which sees Owen Vaccaro’s (Daddy’s Home 2) Lewis move to Michigan in order to live with Jack Black’s (School of Rock) flamboyant uncle type, Jonathan Barnavelt, in the confines of the titular creaky, gothic inspired mansion after the sudden death of his loving parents. Mixing Spielberg-esque moments of fantasy adventure with elements of witchcraft and wizardry in the ilk of the Christopher Columbus directed entries in the Harry Potter series, Roth’s latest is a rather awkward cinematic piece, a movie which although slapped with a 12A rating seems too childish for adults but similarly too freaky for the youngest of audiences, and even with Jack Black giving his most School of Rock performance since, well, School of Rock, Eli Roth’s trip into family friendly escapism just isn’t worth shouting about.

With an opening half hour in which the audience is slowly introduced to the sparkling wonder of Jack Black’s Jonathan, a mediocre warlock blessed with magical tricks and the current incumbent of a free-spirited, spooky and clock-filled household, the opening act of the movie is fairly entertaining as the narrative balances Lewis’ discovery of not only his new residence and family, but school-time friends and foes who are eager to pick on his strange existence and penchant for wearing over-sized ski goggles. As the movie slowly shows its’ hand however, the venture into the central plot involving Kyle MacLachlan’s (Twin Peaks) aptly named Issac Izard, a evil alternative to Jack Black’s good-natured father figure, results in Roth’s movie swiftly falling into the trap of becoming yet another generic and wildly predictable fantastical ride, emphasised by a concluding set piece featuring a complete absence of threat or engagement which makes you stare at your own ticking watch as you count down the minutes before the credits finally roll. Even with the added inclusion of the always reliable Cate Blanchett as Black’s well-spoken, neighbouring witch, one bound with a reluctance to utilise her powerful abilities, The House with a Clock in Its Walls is not original enough to stand the test the time or engaging enough to be a throwaway fun ride and ultimately fails to live up to the brilliance you would expect from such a wonderfully reliable leading cast.