“We’ve Been Here For Twenty-Two Years. This Hospital Was Built On Two Things: Trust And Rules…” 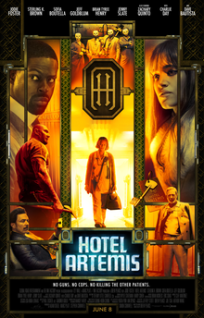 Written and directed by British filmmaker, Drew Pearce, whose previous credits include screenplays for the likes of Iron Man 3 and Mission: Impossible – Rogue Nation, Hotel Artemis features a generously stellar cast set as they are whacked slap band in the middle of a dystopian riot zone and forced into the titular, secretive building where entry is gained for members only and is ran with strict rules and regulations by Jodie Foster’s (The Silence of the Lambs) Jean Thomas AKA The Nurse. With flashes of neo-noir crime drama and a underlying, wacky black comedic sensibility, Pearce’s movie is a strange, tonally manic mess of a movie which sacrifices plot for excruciatingly annoying characters and a narrative through line for dull set pieces, all taking place within a set location which seems to have forgotten to pay the lighting bill, and whilst Pearce in the past has worked alongside the likes of Shane Black, a filmmaker renowned for making dark comedy work successfully, Pearce’s debut doesn’t take any tips from his cinematic learning curve and is unfortunately a painfully dull and excruciatingly boring waste of ninety minutes in which stuff just happens without any sense of reason or point.

With an opening backdrop which introduces a future-world Los Angeles in which privatisation of the area’s water supply has sparked mass rioting and protest from the lower class of the populous, Pearce’s movie follows Sterling K. Brown’s (Black Panther) Waikiki after a bank heist gone wrong forces him into the Hotel Artemis, an off-the-books NHS for the criminal underworld which reeks heavily of The Continental Hotel influence from the John Wick series. Cue the introduction of Jeff Goldblum’s (Thor: Ragnarok) The Wolf King, who seeks vengeance for the theft of his multi-million dollar priced jewels, and soon the action and violence breaks loose, resulting in the likes of Dave Bautista (Spectre), Zachary Quinto (Star Trek) and the ever radiant Sofia Boutella (Atomic Blonde) all flexing their action muscles in an attempt to overshadow their meaningless characterisation. With Charlie Day (Pacific Rim: Uprising) once again proving to be the most annoying Hollywood actor currently employed, Hotel Artemis fails on a fundamental movie-making level by not only lacking a straightforward central narrative, but also a movie which doesn’t manage to be at all accessible or believable, and by the time the movie crawls its’ way to the finish line, it almost felt heavenly to leave the seat in which I had been violently squirming in for the preceding ninety minutes.

“Terrorism Is Just An Excuse…” 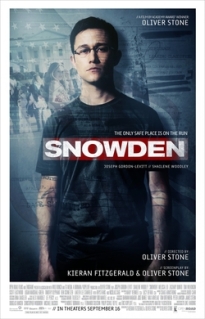 A dramatic tale of one of the most controversial figures in recent history you say? Who shall we bring on as director for that then? Oliver Stone of course, the man renowned for shall we say, colourful political views but more importantly probably the right man for the job when admiring his previous work such as the renowned Vietnam trilogy which included Platoon and Born on the Forth of July, both of which supplied Stone with Oscar wins, as well as his work on astute US political dramas such as JFK and Nixon. Although the Oscar winning documentary Citizenfour provided an in-depth examination of Edward Snowden and his role as the notorious whistle-blower, Stone’s dramatisation of similar events features Joseph Gordon-Levitt in the titular role, alongside a strange rafter of familiar faces such as Timothy Olyphant, Tom Wilkinson and Nicholas Cage who come and go in less-than supporting roles. If the man at the centre of the movie wasn’t so darn interesting, Snowden could have been in danger of being a sour, cold drama, yet with a top performance from Gordon-Levitt, Snowden is a interesting, if rather overlong, political drama.

Where the film is in its’ most interesting is scenes in which we delve into the technological aspect of Snowden’s past, whether it be hidden away in some James Bond-esque spy cave in Hawaii or hiding under a false name in the metropolitan sprawl of Geneva, yet Stone is also interested in the personal side of Snowden, giving us an in-depth examination of his relationship with partner Lindsay Mills (Divergent series’ Shailene Woodley) and the strain put on such by his classified occupation. Unfortunately for Stone, this aspect of the film is undoubtedly the weakest and therefore becomes an issue when at least two-thirds of the drama is focused upon such instead of the more interesting, political issues that Stone is renowned for taking more of an interest in. Throughout the course of the drama, the movie does seep into frank ridiculousness, particularly when Snowden is greeted to the pantomime silliness of the enlarged face of an angry Rhys Ifans, a scene in which it was hard to not laugh at the sheer OTT nature of Stone’s decision to enforce a higher level of dramatisation than the already interesting storyline needed. Snowden is overlong, silly and boring at times but with the one-two of Gordon-Levitt and Woodley attempting to do the most with what they can, the film does work on some level, just not the level the pedigree of Stone should be settling for. 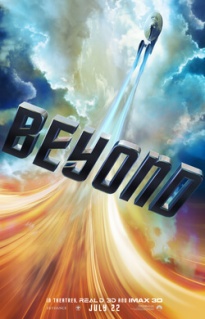 Taking the helm as only producer this time around, it is resoundingly safe to say that J. J. Abrams is the all-round geek saviour of the 20th century where long before breaking box office records and smashing countless other cinematic achievements with Star Wars: The Force Awakens, Mr. Abrams lit the fuse once again in regards to the nations’ love of Star Trek, with a brand new team of space explorers being offset with a brand new timeline, expanding the stories of the crew upon the Enterprise to new and exciting limits. Now, six years since the first Star Trek reboot, Star Trek: Beyond continues the blockbuster success of the franchise, where although it could be regarded as the weakest of the three so far, Justin Lin’s directorial space debut is solid and sometimes spectacular summer popcorn fun featuring everything you would expect from an array of actors each used to their own talents on and off-screen in the six years from which they first began their voyage into deep space, albeit if the series itself is beginning to feel ever so slightly formulaic. 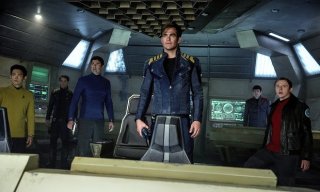 Beginning with a portrayal of a day in the life of our beloved Enterprise crew, Star Trek: Beyond begins rather slowly and then ascends into a two-hour survival mission against the ominous yet dedicated figure of main antagonist Krall, played expertly by everyone’s favourite Bond hopeful, Idris Elba, and his pack of cronies, hell bent on bringing destruction to those who wronged them in the past. If anything, Krall’s role in Beyond is all too small, where although Elba’s performance is enough to make him an effective bad guy, the script just doesn’t allow his character to become complex enough to make him memorable. Of course, the one-two of Pine and Quinto brings the bromance factor to the table, sidelined by the cling-on (no pun intended) of third wheeler Bones, whilst the bad-ass duo of Zoe Saldana and Sofia Boutella gives the female characters an extensive role to bring to life. Of course, overshadowing the release of Beyond is the deeply saddening loss of Anton Yelchin, an actor lost too young and an actor whose roles in films such as Green Room and the Star Trek franchise means he will not swiftly be forgotten. Beyond is Star Trek to the T. A classic adventure with some great thrills, if not entirely up to the mark of its’ predecessors within the 21st century revival trilogy.

When it comes to big-screen adaptations of world-famous video games it is well established that such films tend not to do so well both in the critical and commercial sense with the biggest examples being the terrible Silent Hill series, the shockingly dour Max Payne, and the Resident Evil series, which although stands out as being one of the better transformations from console to cinema, has slowly been hung, drawn and quartered resulting in its’ most recent entries seemingly being squeezed so far from its’ original format, they are only a shadow of the much more superior games in which they first were presented upon. Adding to the spectacular face-palm-esque bundle of video game movies this week is Hitman: Agent 47, a film which follows in the footsteps of its’ brothers’ in arms by being not only shockingly terrible, but single-handedly tainting the excellence of the video games in which it is based upon (I mean Hitman: Blood Money was rather brill right?). Remember the first Hitman movie adaptation released a few years ago? Well that is Citizen Kane in comparison to this dull, lacklustre excuse of a movie in which its’ only real purpose in life is to pursue the bucks of those who desire the original games so dearly.

So in terms of plot, Rupert Friend plays Agent 47, a joyless, lifeless, emotionless, hairless killer raised under the wing of geneticist Dr. Peter Litvenko (Hinds) who after years of hiding is located by Syndicate leader Antoine LeClerq who sends T-1000 rip-off John Smith (Quinto) to track him down in order to use his vast knowledge of the Agent programme and create his own personal army of silent assassins. Boring, boring, boring. Also in there somewhere is a plot thread about Litvenko’s daughter but to be honest, I care as much about the plot of this film as the team obviously did behind making it with Agent 47 being a constant cycle of cliche after cliche, cringe-worthy speech after cringe-worthy speech and acting so wooden, I was surprised none of the actors came out petrified at the end of it. Add into the mix awful CGI, a overload of pointless violence, and quotes (The “what you do that defines you” speech from Batman Begins), scenes (The metal detector/gun scene from The Matrix) and characters (T-1000 from Terminator 2: Judgement Day) just stolen from other, and subsequently better movies, Hitman: Agent 47 is nothing more than overlong Audi commercial which just happened to find the rights to one of the biggest video games since the birth of gaming. Incredibly awful.